To go, or not to go? That was our question.

Everyone that had been to Flores raved about it, this we knew. We had hoped to take the 3 day 2 night boat trip from Lombok to Labuan Bajo, but because of the rainy season (not to mention Jaime’s chronic seasickness) we were highly advised not to do so.  On a whim we decided to book a flight to Labuan Bajo (LBJ as I will refer to it from here) because of our desire to see the Komodo Islands and the beautiful marine life that surrounds them.

Now let me be clear, when I’m talking about our trip to Flores, we really only visited LBJ and a few of the surrounding islands. Flores itself is massive and it would have taken us a good ten days (at least) to explore the island. Despite having two months in Indonesia there is simply too much to do and see if you don’t want to spend every day rushing around, so we elected to do what we could with the time we had.

I must admit, I was less than thrilled with my first impressions of LBJ. The town itself is difficult to walk around (particularly in the rain), and there isn’t a lot happening besides dive shops, tourist information sites, hostels and restaurants. That said, it’s a town that feels ‘lived in’ (ie: not completely overtaken by tourism) and the people were very friendly. Most people visit LBJ with the intention of heading out on the water, and that was our plan.

We had heard about the Le Pirate Beach Club chain opening up a ‘Boatel’ a short boat ride from LBJ and decided to spend a day out there. They actually hooked us up as there was only one other couple on the boat (with twelve rooms) so they sent us with free transport. We more than made up for it with the money we spent on beer, but what a day. Little did we know at the time that this would be the nicest weather we encountered in Flores.

As mentioned, we had wanted to get out to the Komodo Islands. Every tour operator can offer you a day trip out or a two day, one night (sleep on the boat) trip. We figured we would see more and get better value out of the latter, so we elected to give it a try, despite Jaime’s trepidation about sleeping on a boat. The trip itself cost us 800,000 IDR per person (about $65USD) and included all of our meals. To access the Komodo National Park is an additional 250,000 IDR which pays for your park fee, a guide, etc.

What I wasn’t aware of was how long it would take to travel from island to island. We set off about 8AM and it wasn’t until after noon that we had arrived in Rinca. Initially I was quite excited to see komodo dragons, the largest lizards on Earth with lengths up to 3m. I suppose part of it is that we have been spoiled with all of the wildlife that we have seen in our travels, but I wasn’t overly impressed initially by Rinca. The guide was interesting and informative, however, initially we ‘spotted’ about ten komodos lounging under the ranger huts. The ranger claimed that they only come because of the smell of food and are not in fact fed, but it all felt quite gimmicky to me. That said, the landscape of Rinca was beautiful and the guide was informative, so it wasn’t all a disappointment.

From Rinca it was off to Komodo Island itself. We stopped by the Pink Beach but the weather began to act up and it was pouring by the time we arrived, less than ideal for a stroll on the beach. I realized that I had grossly underestimated just how giant these islands are. Komodo Island is HUGE and it seems ridiculously presumptuous in hindsight that you would show up there and simply bump into wild komodos (nor would you really want to, they are fiercely aggressive and territorial). Perhaps it was the lack of tourists (more people opt for the one day trip and were long gone by the time we arrived at Komodo), but I much preferred the Komodo Island to Rinca. It felt very wild (although how long this will be is debatable, you can see the hallmark signs of development all over the harbour) with a jagged, dramatic coastline .

Our overnight was relatively uneventful (despite the docking in the harbour being a bit rougher than promised, with a few people showing the symptoms of seasickness) but the morning featured a beautiful sunrise and the promise of a great day. 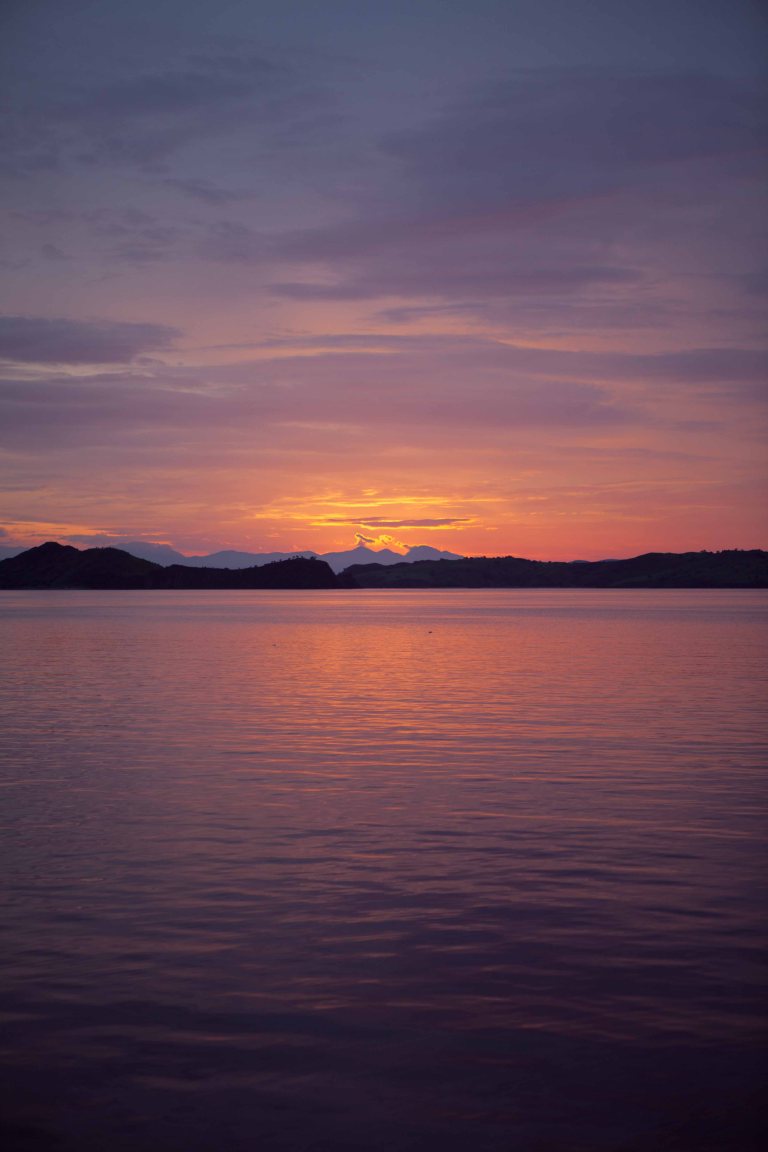 Our first stop the second day was Pulau Padar for a hike up to an iconic viewpoint. The hike itself isn’t overly challenging, and the views along the way are absolutely stunning. When we arrived at the top the sun crept through the clouds and lit up the entire scene in its magnificent glory.

From Padar it was off to Manta Point. Now, traveling in the rainy season does have its obvious drawbacks (weather), but there are many positives such as lack of tourists, better deals, etc. One of the other pros is that mantas love the tumultuous waters of the rainy season, and our likelihood of seeing them was very high.

Now, the currents in these waters are strong. I had jumped into the water at the Pink Beach the day prior and within minutes been swept far away from the boat, making for an arduous journey back. I have a lot of experience snorkelling and diving and am quite confident in the water, but you could tell that some of the other passengers were not overly excited about jumping off the boat into a sea filled with giant creatures ranging up to 4m in size in strong currents. Understandable.

As we were cruising along, all of a sudden one of the guys working on the boat cried out ‘Manta! Manta!’ Looking over the side of the boat, we could see the silhouette of giant mantas scattered all over the water. ‘Jump now!’ he cried. I had my snorkel, fins, and GoPro at the ready, and without giving it a second thought I jumped overboard, assuming everyone would be following right behind me. Wrong.

At first it was a little daunting being in the water with little to no control over the direction I was swimming because of the current (it was also initially not possible to see the bottom in these deep waters). I looked at the boat and everyone was pointing to my left so I began to kick as hard as possible. After a few minutes I heard something beside me. I looked over and there was a manta, curiously gliding along beside me in an effortless manner. My heart beating wildly I began to film. Suddenly there were two, then three, then four mantas circling me. What sounds like it would be a panic inducing scenario was oddly comforting, myself in their element, just a visitor.

Unfortunately, no one else was with me to share this magical moment and I had drifted about 500m from the boat. This time the boat drove to get me, picking me up with a huge grin on my face. Eventually everyone jumped in together and we all had a chance to see mantas first hand, but I’ll never forget that incredible initial encounter.

Side bar: one of the most upsetting/infuriating things that we consistency saw in this otherwise pristine environment (a problem throughout Indonesia and many many countries we have visited) is plastic floating in the water. Not a bottle or two, but hundreds, even thousands of bottles and plastic bags, particularly where the currents converge. Mantas are filter feeders, and it breaks my heart to think of how many of these beautiful creatures and other marine life are dying right before our eyes because of lack of awareness of the dangers of plastic. Something really has to be done. And soon.

Our last stop was Kanawa Island for some amazing snorkelling, but it had to be rushed as a huge storm was coming in and we needed to get back to LBJ. The last two hours were a bit frightening and the boat cascaded back in forth in pretty gigantic waves, but we made it back just before the storm fully opened up.

We stayed in LBJ for another two days waiting for the weather to clear, but as it showed little sign of abating we decided to fly back to Bali where there is more to do in inclement weather.

Would I advise visiting Flores? I would, but it would depend on the seasonality. Taking the boat from Lombok would be a great experience in the dry season, and I would definitely allocate more time to explore the island itself. That said, I was grateful we had a chance to head out and see some of the amazing surroundings from LBJ.