Iran. Mention the name of this country to ten random people and you are bound to hear ten wildly different opinions. On one hand are the stories of people who have gone. Tales of wonder and magic, amazing food and hospitable people. On the other hand, there is the media narrative, stories of a regional powerhouse using methods both covert and overt in order to gain a stranglehold over the Middle East. What is to be believed? Is Iran safe? How would the people react towards me as a westerner? Would I feel unwelcome? The underlying theme of these questions is uncertainty, and more than anything I wanted to form an opinion of my own.

As Canadians, in order for us to get a visa, we were required to take a guided tour. We settled with a company called Uppersia, who outsourced a guide name Ali Khoshkam for our ten days in Iran. Ali would be with us every step of the way, so suffice to say we were looking forward to meeting him. We figured that whether we hit it off would go a long way towards determining what we were going to see, and how it would be presented to us.

Our route was to be the classic Tehran – Isfahan – Yazd – Shiraz, where we would catch a flight back to Tehran upon conclusion of our trip. We met Ali on our first morning in the hotel lobby in Tehran. A tall, young, enthusiastic Iranian, he greeted us with a big smile and an air of familiarity and casualness that put me immediately at ease. I knew right away that we were in good hands. 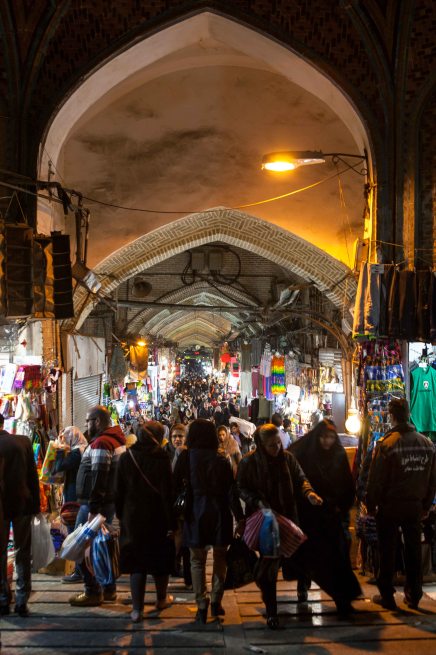 Walking the streets of Tehran, the first thing you notice is the people. I was curious as to whether the power of the government would cast a repressive shadow over the people. It didn’t take long to see that this was not the case. The people were friendly, engaging, remarkably adept at English (the national language of Iran is Farsi, and being an Islamic country with mixed feelings towards the West, I wasn’t certain how much English students would learn in school), well-educated and fiercely proud of their heritage. The people are quick to speak with pride of being Persian first and foremost, drawing on a national collective identity dating back to the 6th century BC. Women in particular, despite having to wear a head scarf, were commonly adorned with makeup and stylish clothing, and appeared much more liberal and progressive in their attitudes than women that I have encountered in other travels throughout the Islamic world. 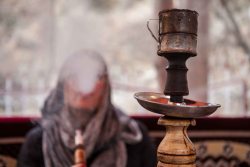 Our second day in Tehran took us to Tochal, a mountain ski resort located in the Alborz mountain range, a quick getaway for Iranians looking to have a bit of fun on a weekend or holiday. As with the day prior, I couldn’t help but be taken aback by just how normal everything was. Families laughing together, high school students out with friends, a palpable level of joy and fun hovering over the entire place. Where were the people watching me, analyzing my calculative western mind in action and taking pre-emptive measures to deal with me accordingly? This reminded me more of a ski resort in Canada than somewhere in the Middle East. This realization was one of the first of many awakenings where I could see just how deep my ignorance ran, and how great was the dissonance between what I’d been told and what I could see. 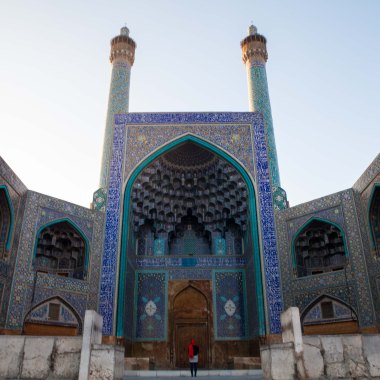 If Tehran is the administrative capital of Iran, Isfahan is its soul. With a rich and storied history of both Persian and Islamic design, Isfahan is the type of place that people are referring to when they use the cliché expression of somewhere that will ‘take your breath away.’ The central area of the is the Naghsh-e Jahan Square, one of the largest city squares in the world and a well-deserved UNESCO Heritage Site. The building surrounding the square date from the Safavid era of Iran and include the Shah Mosque, Ali Qapu Palace, Isfahan Grand Bazaar and the Sheikh Lotf Allah Mosque, truly one of the most incredible feats of architecture I have ever seen. The entire square is almost 90,000 metres, and it took about half a second to fall head over heels in love with the entirety of its beauty. 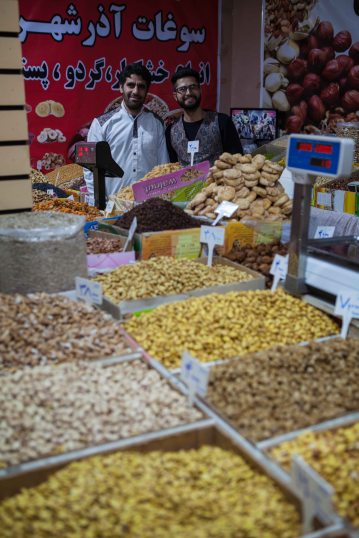 From Isfahan we travelled by overnight bus (our primary method of transportation) to Yazd, the hometown of our guide Ali. Yazd stands in stark contrast to Isfahan, the lush appearance of the latter being replaced with desert like sandstone and rooftops that adjoin neighbours like a picturesque labyrinth grown straight from the desert itself. Entirely different, but still incredibly beautiful, it reminded me of a scene from One Thousand and One Nights. Our time in Yazd also coincided with my birthday, and Ali pulled out the stops. A straight razor shave at the local barber shop followed by lunch at his mom and dad’s house (as anywhere in the world where they take food seriously, the place to try the best local cuisine is in someone’s home, and this was definitely no exception). At sunset we drove out into the desert to watch the sun set over the mountains, the majestic cry of the call to prayer coinciding with the last of the sun’s rays, drawing to a close a birthday I’ll never forget. 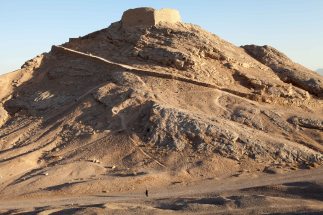 The last city we visited was Shiraz, a city of gardens, poets and dreamers. A common day trip from Shiraz is to Persepolis, the ceremonial capital of the powerful Achaemenid Empire that ruled from 550-330BC. Another UNESCO World Heritage Site, Persepolis was taken by Alexander the Great after a great siege in 330BC. The remains are brilliantly preserved and yet another testament to this nation’s rich and storied past. En route to Persepolis stands Naqsh-e Rustam, the necropolis housing the tombs of the great Achaemenid kings. Imagine seeing one of the great Egyptian sites of old, but being literally the only person there. 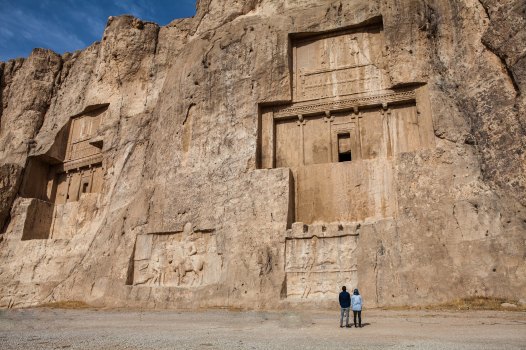 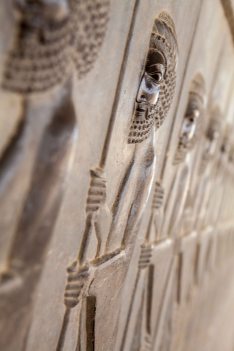 The markets of Shiraz, as elsewhere in Iran, are electric. The smells of cinnamon and cloves, rich dates, ruby-red cherries, roasted walnuts and pistachios for sale, freshly pressed pomegranate juice around every corner, there’s something for everyone. One of my favourite buildings we saw in Iran is the famous Nasir ol Molk Mosque. Shortly after the sun rises there is a brief time period where if nature aligns the sun shines directly through the beautifully intricate stained glass window, alighting the interior in a brilliant display of light and patterns. For the umpteenth time in Iran, I was left with my jaw open, completely speechless. 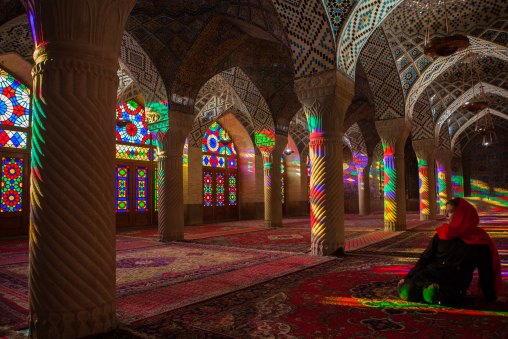 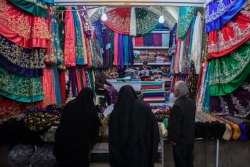 With this our time in Iran was over. The architecture, history, and culture of Iran combine together to weave a rich tapestry, the likes of which could rival any great civilization. At this point I was finally able to answer my own questions. Was Iran safe? Unbelievably so, I’ve actually never felt safer. Petty crime is virtually non-existent in Iran, perhaps only Singapore has provided me with the same sense of security walking the streets. How would the people react to me as a westerner? Everywhere we went, people were curious about us, our home country, and our views on Iran. There was no element of hostility, either overt or underlying. To this day I have Iranians commenting on my photos constantly saying how happy they are that I visited and saw Iran for myself. Would I feel welcome? Well, I think that has already been answered. The question became, would it be possible to welcome Iranians with even a modicum of the decency and respect they had shown me? When I asked Iranians whether they would want to come to Canada, the most common response was a warm smile and the word ‘Inshallah’, or God Willing. I am forever grateful that I had a chance to see this country through my own eyes. 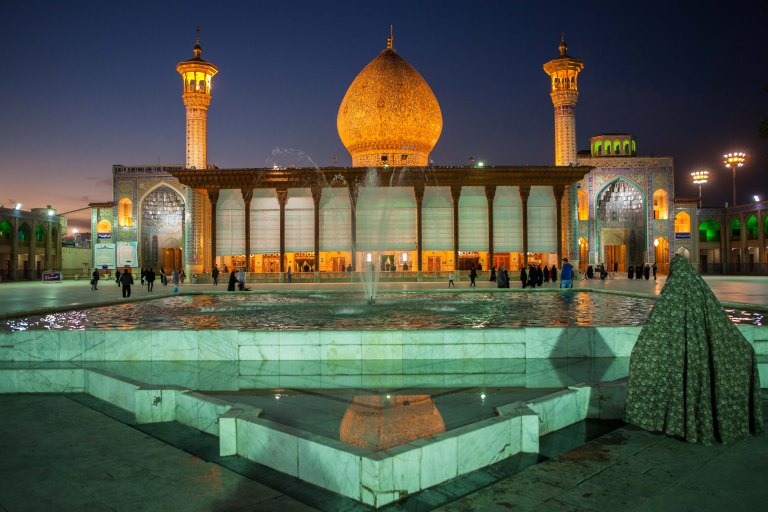